The practice of alchemy is something that has fascinated the minds of many people throughout the centuries. There have been a number of books written on the subject, a number of films made, and now a casino slots game inspired by the same theme. It is the ability, accepted as a fictional ability, of turning base metals into gold. The Alchemist, who is the main symbol of the game, is a member of the secretive branch of scientists who attempted learning the magical power of this knowledge.

The Alchemists Spell is a five reel game, with the possibility of an enormous number of ways to win. There are in fact 243 different opportunities for winning a good jackpot. That also means that there is no standard pay line structure, and a win can be made with matching symbols on adjacent reels from left to right. The setting where all this takes place is a shadowy laboratory where jars of liquid substances and old dusty books occupy the top shelves.

The main symbols of the Alchemists Spell are a green book of spells, the jars of bubbling chemicals, a seal on a scroll and the Alchemist himself, a typical gray haired old chemist of the fables. There are lower symbols too, which are the standard 9, 10, J, Q, K and A.

The scatter symbol is a big red crystal, and the three wilds are three bars, one each or gold, silver and bronze. This game tells a story steeped in magic, and makes use of evocative art in the background and the symbols. 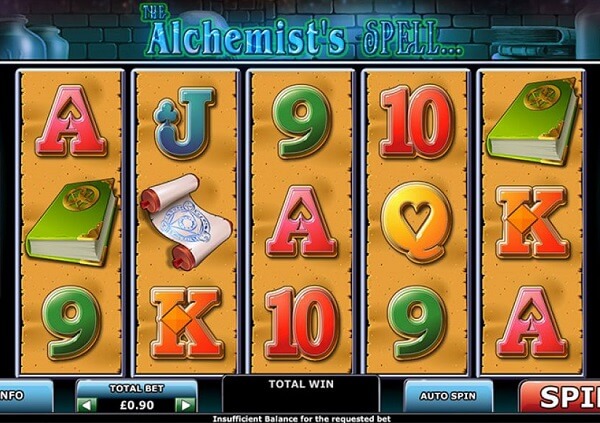 The Alchemists Spell is a game that has a different pay line feature from most slot games. The main game board is comprised of five spinning reels, each marked with the symbols of the game. When the reels spin, they show a total of fifteen random symbols. The aim is to have the same symbol appear on three or more consecutive reels, with the exception of the 9 and 10.  These two symbols only need to appear on two consecutive reels. When this happens the reward won will be based on the value of the bets placed, and multiplied by the set amount based on the number of symbols appearing.

When the player lands on three, four or five of the red crystal scatter symbols anywhere on the reels, the Free Spins bonus game in the Alchemists Spell slots will be activated. The player will win ten, fifteen or twenty free spins, depending on the number of red crystals. During the free spins feature, the wild metal bars will add special awards, if they contribute to the winning pay line. If the Gold wilds appear on reel four only any wins will be multiplied by five. The silver wilds appearing on reel three only will multiply any wins by three, and if the bronze wilds appear on reels two only any wins will be multiplied by two.

It is also possible for more than one wild to appear in the Alchemists Spell, and give the player a winning combination, and if this happens, the wilds will be multiplied. All three wilds in that combination will reward the player with the maximum multiplier of thirty times any wins.

The graphics of the Alchemists Spell are full of well-designed and colourful imagery, and there is an interesting story line.